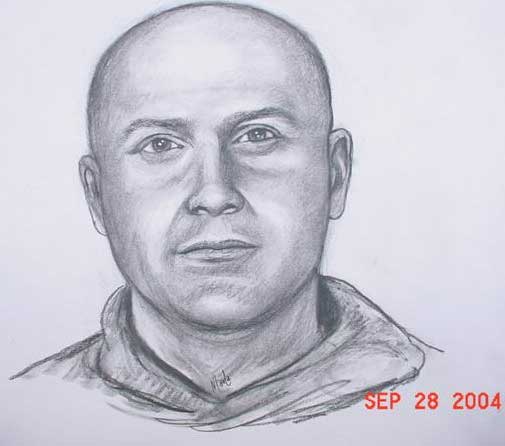 On April 13, 2006, a homeowner interrupted a burglary in progress at his residence on State Hwy. 203 in southern Appling County, Georgia, and was robbed and shot by the offneder. View flyer for a photograph and list of law enforcement agencies to contact if you know the identity or whereabouts of this person.

The Georgia Bureau of Investigation, the Washington Police Department (Wilkes County) the Banks County Sheriff’s Office and the Augusta Office of the FBI are seeking the public’s help in identifying the person in the above sketch linked to two recent bank robberies in Banks County and Washington, Georgia.

On September 17, 2004 at approximately 11:56 a.m., a white male in his early 30s with a stocky build, approximately 5’8” in height, robbed the Regions Bank at Banks Crossing, Commerce, Georgia, near Interstate-85. The suspect was wearing a loose fitting, blue flannel checkered shirt, a soft fishing type hat with a brim all the way around, and dark sun glasses. The suspect fled the area on foot.

On September 23, 2004, at approximately 11:40 a.m., an individual attempted to rob the Farmers and Merchants Bank in Washington, Georgia. The subject was wearing a grey hooded sweat shirt, loose fitting blue jeans; brown boot cut shoes, and dark sunglasses. He is described as a white male, early to late 30s, 5'6"-5'9" in height, weighing 175-190 lbs. The attached sketch was from a witness who saw the individual before he entered the bank and concealed his face.

The physical descriptions along with other similarities lead authorities to believe that the same man committed both crimes.