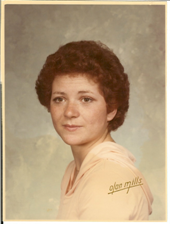 Mary Susan Humphrey was last seen by friends on Friday, May 30, 1980 in Valdosta, Georgia after leaving Grego’s, which was a popular night club in the 80’s, with a male she met that night. Humphrey was a Moody Air Force Base Airman First Class assigned as an air traffic controller who lived off base near Walker’s Crossing. Humphrey left the bar and went to the man’s apartment off Forrest Street in Valdosta. The man told officers that Humphrey wanted to go home around 3:00 a.m. and she left his apartment walking down Forrest Street near Park Avenue.

Humphrey was a white female, 23 YOA, with red hair, stood 5’3” tall and weighed 128 pounds. Humphrey was originally from Lenexa, Kansas and was stationed at Moody Air Force Base. Humphrey was last seen wearing a long sleeve burgundy in color shirt and dark colored slacks.

On Sunday, June 15, 1980, Humphrey’s body was discovered about 50 feet off a dirt road known as Old Willacoochee Road or more commonly called Double Bridge Road in Berrien County by a group of men running their hunting dogs.

The investigation led law enforcement at the time to arrest a former boyfriend of Humphrey. He was tried and acquitted by a Berrien County Jury on October 10, 1980.

The GBI Douglas Office is asking for any assistance or information from the public which would lead to the identity of the person(s) responsible for the murder of Mary Susan Humphrey. The Humphrey family has remained in touch with investigators and would greatly appreciate getting closure for the loss of their loved one.

If anyone has any information concerning Mary Susan Humphrey, please contact the GBI Office in Douglas, Ga. at 912-389-4103.